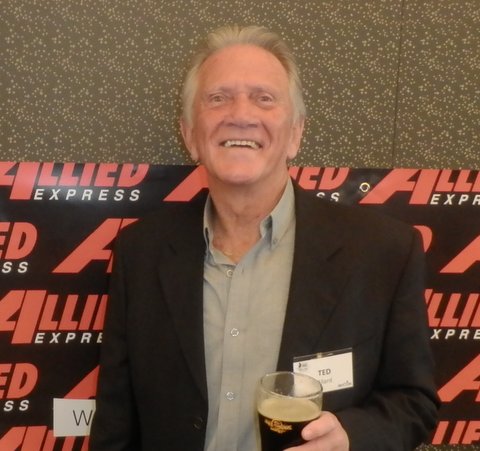 Ted played his early Rugby League in the Eastern Suburbs district starting in the early 1950’s. 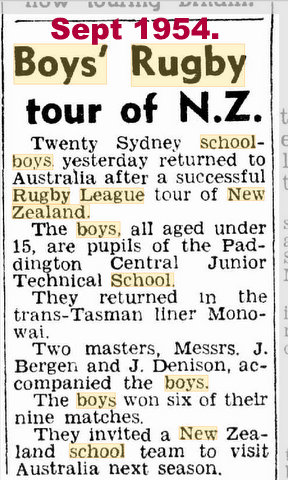 Ted was chosen to go on the first ever school boys tour of New Zealand in 1954. 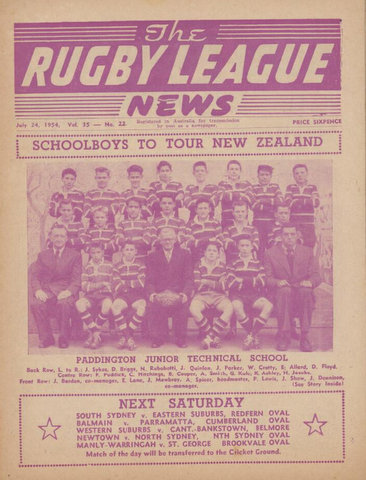 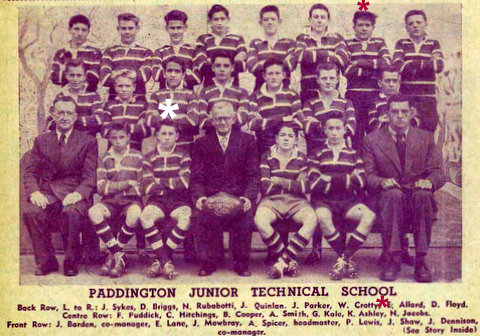 Also in the team was a very young and very fast John Mowbray.

I asked John Oates who knew Ted a lot better than I did to tell me some of his boyhood memories of Teddy Allard.

Ted Allard left Paddington School, the year before I had started there.  He was spoken about  in the highest of respect and for his exceptional sporting prowess.   I had met him on three occasions at the Rushcutters Bay swimming  baths, where all of the Paddington locals went for swimming during the day and of an evening. 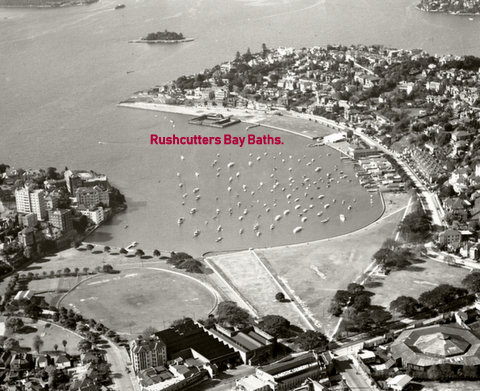 The baths had subsequently been demolished some 50 years ago. He was a very good looking and stylish youth, olive skinned with a muscular build, brush back “Tony Curtis” style hair cut  and when he was at the baths; you knew he was there, because of the volume of young female swimmers having  increased by 300%, all doing backstroke, trying to win his attention.
He was the sprinting champion of the Paddington School and he had won the Sprint Championship with John Mowbray coming a close second, when on the New Zealand Tour with both the Paddington and New Zealand teams having competed.
I do not know of the Eastern Suburbs Junior Team he had played with, but I am of the understanding that some of his team mates had played with the now defunct Bondi Royals and the now defunct Woollahra Waratahs. I think his teammates the past Kevin Ashley and the past Grahame Kale, had played with the Woollahra Waratahs. However, Frankie Puddick and Charlie Hitchings had played for Bronte, whilst Jackie Shaw and Ernie Lane had played for Bondi United.  I spoke to Alex for about 20 minutes at the “Beaver’s” funeral and he was a close mate of Grahame Kale, whereupon we spoke about that New Zealand touring party at length, including Teddy Allard’s exceptional speed.

A few years later Ted was grade with Easts in 1957. 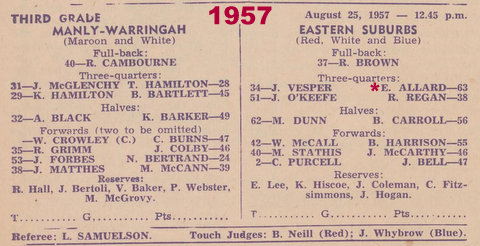 Ted on the wing for Easts v Manly. 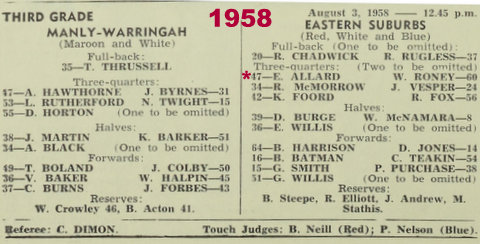 As far as I can research Ted played 2 First Grade game at Balmain but unfortunately Ted was chosen after the RLN programs were printed.

But with the magic of 2019 we can see how the programs should of looked. 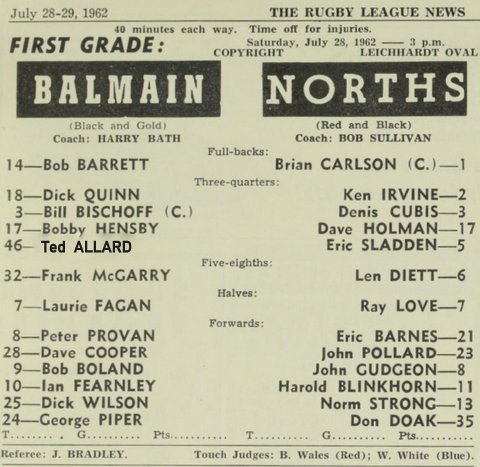 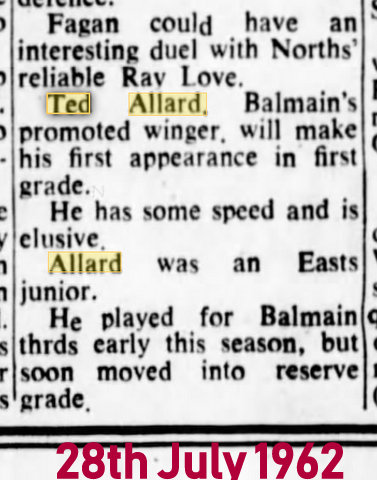 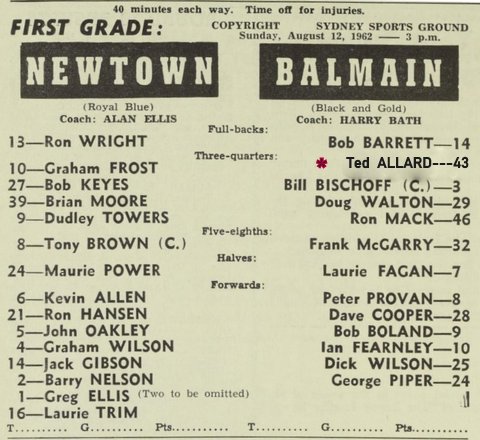 Ted scored a try in that game against Newtown and below is the printed proof of his Ist Grade try. 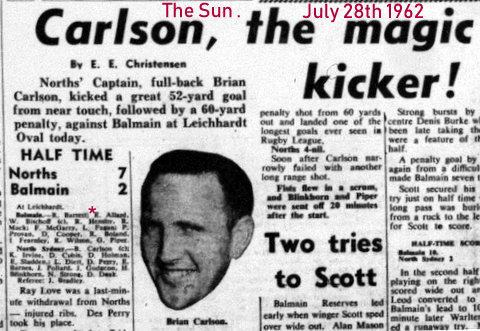 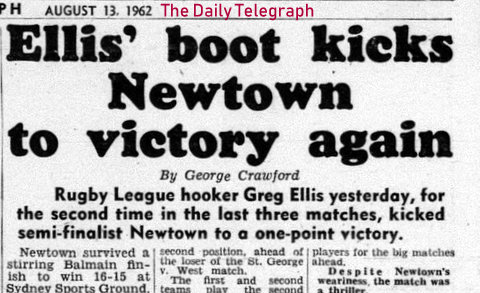 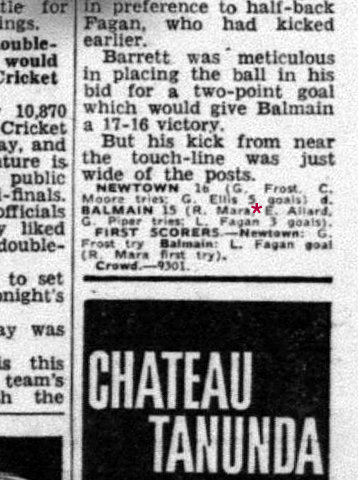 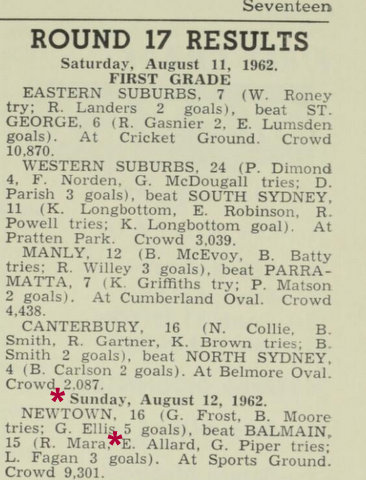 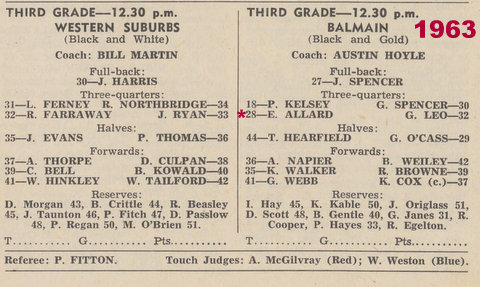 In 1967 Ted saw the light and played for Wests for the next two seasons. 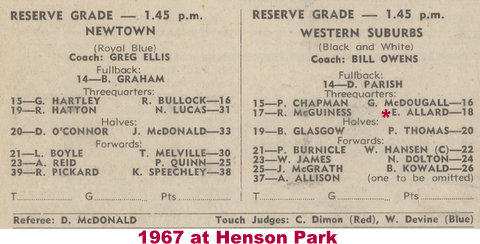 Wests Third Grade won the premiership in 1967 and Ted was one of the members of that winning squad. 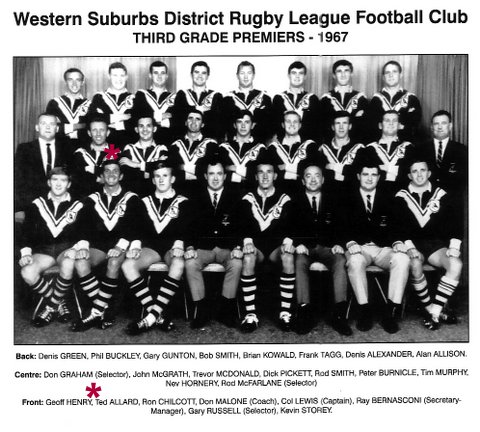 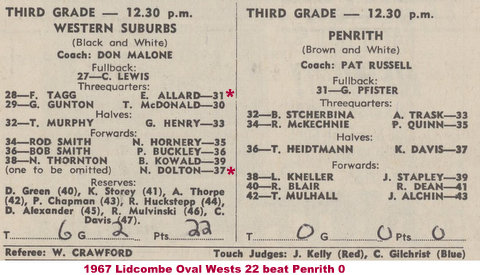 Below Ted catches up with old team mate Noel Dolton. 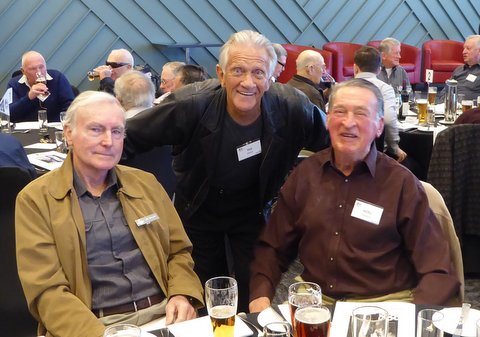 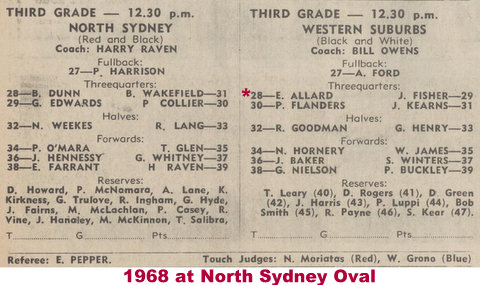 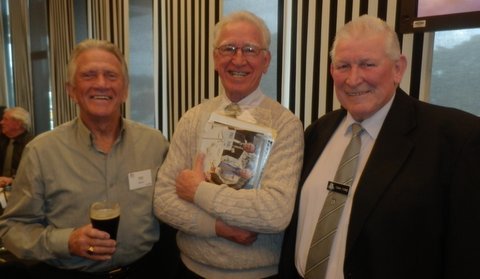 Col Lewis was the captain of the 1967 winning team. 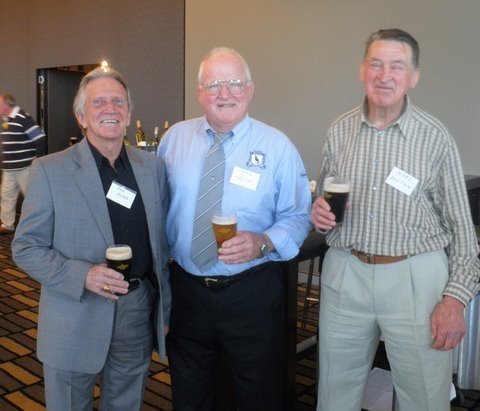 Ted Allard was always smiling and happy to have his photo taken at the PPM reunions.

He was always up for a chat.

Ted we will miss you.