The current edition of the Men Of League journal carries the news of the death on 11 November of Pratten Park Magpies member DENIS “PUD” SMITH.

Unfortunately we had not previously been informed of his passing.

Dennis played lower grades for the Magpies in the early sixties.

Story below thanks to the MOL.

Pud had been fighting a serious condition for several years. Unfortunately, he suffered a stroke on the Friday preceding his death. Pud is remembered for his contribution to rugby league. He played in the front row for the 1963 premiership winning Gosford Townies aged just 17.

Then went on to play lower grades with Western Suburbs. 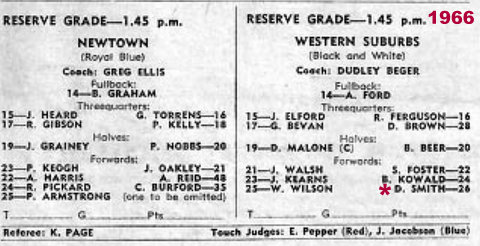 He then returned to the Central Coast and played 17 seasons with the Umina Bunnies.

Pud was a great follower of rugby league and the Men of League Foundation for the years up until his death.

Pud will be sadly missed by his family and friends, but those special memories of Pud as a person and a local rugby league legend will live on.