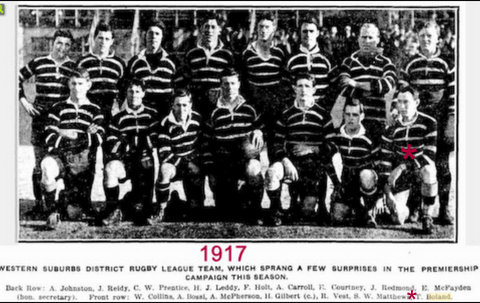 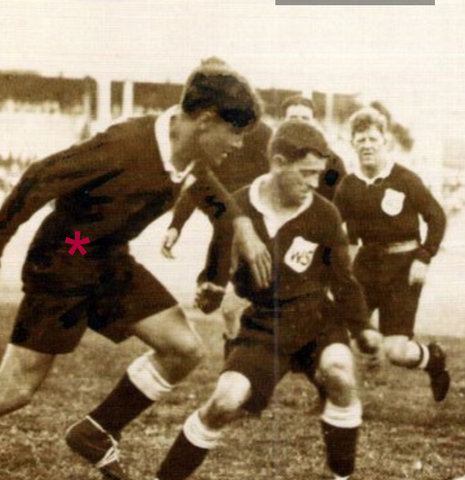 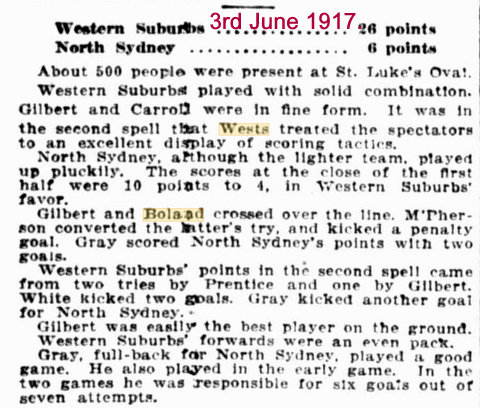 In a Round 3 match, 1917, on the 26th May, a new player, T Boland, debuted on the left wing for Western Suburbs versus Balmain. He wasn’t mentioned in any newspaper reports in an inauspicious debut which Wests lost 21-0. However, in 1917, he went on to play 8 First Grade games for a try and 2 City Cup matches for 3 tries and in 1918, 6 First Grade games for 3 tries (including a penalty try). There are numerous references to his speed; e.g. “… then Boland, on the left. The last named, very fast at all times, outpaced Scannell and scored his second try.” [1] This culminates in Boland participating in Rugby League’s Sprint Championship at the Sydney Cricket Ground in August 1918. 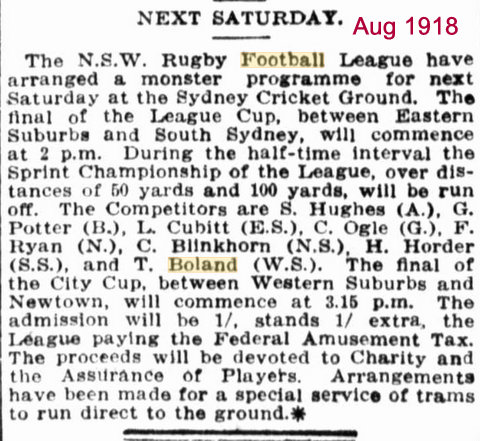 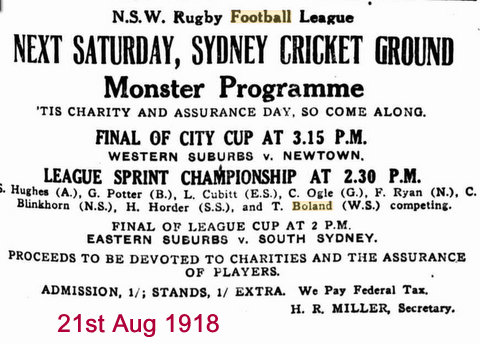 Advert for the Monster Programme.

Note: Wests 18 beat Newtown 8 in the Final of the City Cup. 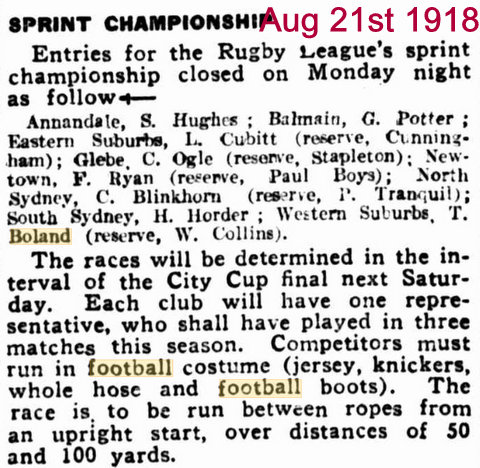 Lets hope they all wore their knickers.

* Ted Boland at the SCG.

Note: not sure if it would be OK today for the starter (man in hat) to use a sawn – off shotgun to start a race.

A photo has T Boland, now named as Ted Boland, at the starting line with George Potter (Balmain), Charlie Ogle (Glebe), Harold Horder (Souths), S Hughes (Annandale), S Cunningham (Easts) and Felix Ryan (Newtown). Boland won the 50 yards from Cunningham and Hughes (although news reports indicate Boland may have jumped the gun). When it went to 100 yards Horder won from Hughes and Cunningham. Boland finished third overall, with 12 points out of 16 and then anchored the relay team to second place. At the end of 1918 Ted Boland disappeared from Wests’ records and does not appear anywhere else. In a short career he played 16 matches, scored seven tries and was noted as a flying left winger.

The first doubt raised as a researcher came with the name. In most records he appears as Edward (Ted) Boland and his short stint with Wests is tagged on the end of his career. Edward (Ted) Boland debuted for North Sydney in 1908, played to 1913, with one game for Cumberland in 1908 as well and then returned to play for North Sydney in 1916, most likely after service in WW1. Trouble is, in all those matches, Edward (Ted) Boland played front row, hooker or second row. Alarm bells ring; a front rower in 1908 becoming a fast winger in 1917 and beating Harold Horder in a sprint in 1918! Obviously the T Boland of 1917/18 is not the Edward (Ted) Boland of the official records. So, who is he? There is a Thomas Boland born 1893 in Burwood, making him 20 in his debut so he’s an obvious candidate.

In the Wests Archives we hold every Annual Report from 1929-1999. The search is still on for 1908-1927 Reports which should provide a gold mine of information on the early years of the club.

A recent discovery of the 1918 Annual Report provided a valuable cross-reference but also another T Boland red flag. The players’ names and records matched and validated the information already gleaned from multiple newspaper reports with one glaring exception. There is no Ted Boland ! Not only that, the report states “In the NSWRL Championship, your representative ran third, receving 12 points out of 16……” 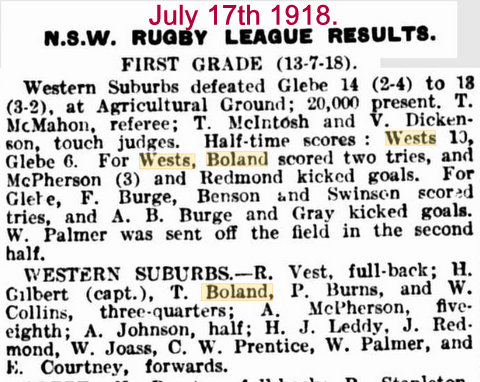 Interestingly, there was a record for Tom McCauley as having played six games, scoring three tries, the same record as Ted Boland. Tom McCauley is not mentioned in any newspaper reports in 1918. It appeared that Ted Boland had been white-washed from the records; had become a persona non-grata in the Club. I wondered who had been upset. There was obviously a story there. I sent an email to Tony Lewis, erstwhile administrator of the Pratten Park Magpies website, asking if he had any ideas as to why you would white-wash a player out of the records. Tony sent back a few references he recovered on both Ted Boland and Tom McCauley. One stood out; a death notice from the Ryerson Index on a Thomas Boland McCauley. What? Tom McCauley’s middle name was Boland? There’s no doubt it’s Tom McCauley. The notice reads “ ……. Dear brother ….. of …..Frank…..” Frank McCauley played for Wests in 1924-5 and was noted on his debut as the brother of the flying winger, Tom McCauley. 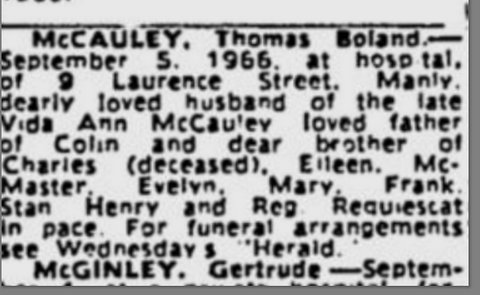 Then came a piece of evidence that turned everything on its head. The Cynic was a Rugby League commentator who wrote for The Referee and The Arrow. Writing in The Referee on the 11th August 1917 he said “…when Boland got away and couldn’t be run down by Horder….” 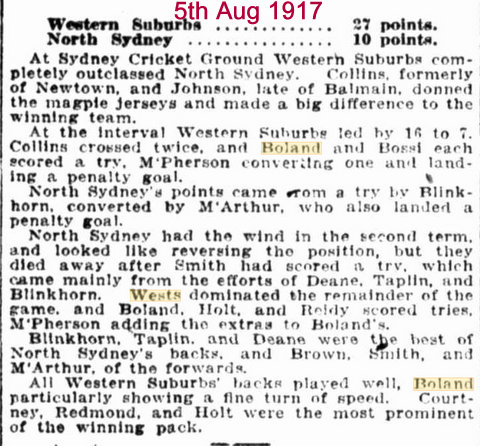 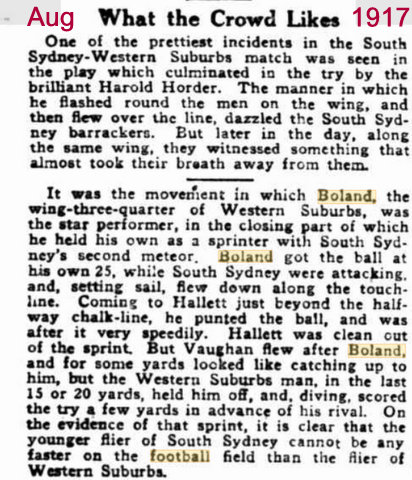 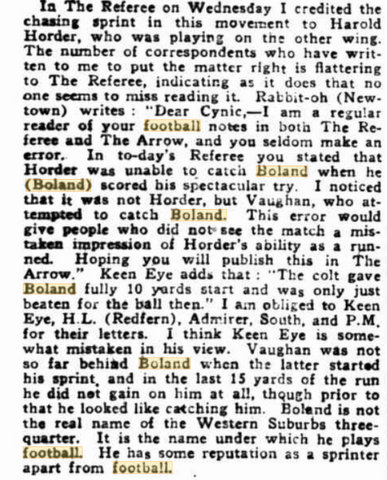 There was a string of letters to the Cynic pointing out that the chaser was the other Souths’ winger, Gordon Vaughan. The Cynic admits his error but says that Vaughan couldn’t make any ground at all. Then comes the bombshell; “Boland is not the real name of the Western Suburbs three-quarter. He has some reputation as a sprinter apart from football.” So, if Boland is not his real name and Tom McCauley has been given his record in the 1918 Annual Report is it possible, even likely, that Ted Boland is actually Tom McCauley?

What then do we know of Tom McCauley? He was born Thomas B McCauley in 1894 at Marrickville to parents Samuel and Ellen. It appears that Ellen’s maiden name was Boland. He died in 1966. He had played for the Western Suburbs Rugby Union team in 1914 and was part of the mass defection from that club at the end of that year, other notable moves being the great Clarrie Prentice and his brother Archie, Archie Mitchell, Harold Leddy and Athol White. The reference to McCauley in a game against Eastern Suburbs is interesting; “A final rally in which sprinter McCauley and Bate figured, gave Wests their only score. Leddy and C W Prentice were the best forwards, while Mitchell and White were the ablest backs.”

So in 1914 McCauley was already being referenced as the ‘sprinter’. A perusal of the records of the Western Suburbs Amateur Athletic Club in 1913 finds multiple references to a T B McCauley. In February he ran second off scratch over both 100 and 440 yards  and, significantly, in September won a 75 yard Handicap off scratch giving four and a half yards to the runner up.

He was obviously a quality sprinter even at nineteen. His continuing connection to the Athletics Club is shown when he is elected as a Vice-President in 1918.

The next piece in the puzzle is the photographic evidence. There are four official photos of Tom McCauley; 1916, 1917 and 1918 First Grade and the 1919 City Cup winners, all team photos. 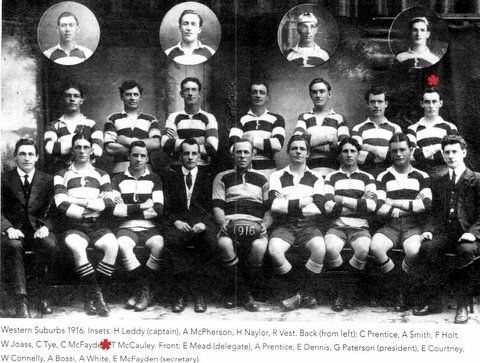 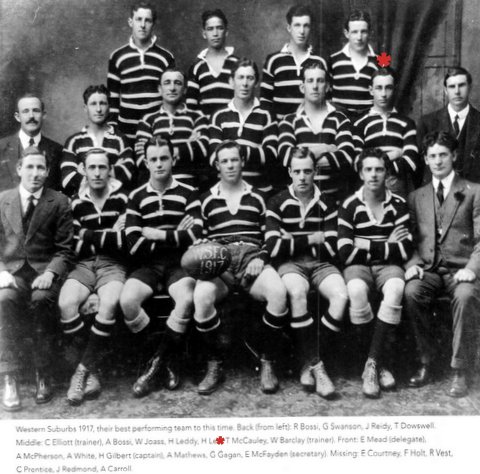 * Tom happy to look the camera straight in the eye.

There are two unofficial photos of Ted Boland; one a 1917 newspaper photo(see below) and one of him at the starting line in the 1918 Sprint Event; both photos from the Mitchell Library Collection. The 1917 grainy newspaper photo is very telling. The photographer has obviously assembled the team before a match on the ground. Everybody is looking straight at the camera except T Boland, who looks a bit like a rabbit caught in a spot light.

He couldn’t get out of the photo! The symmetrical features in all photos are the same; even allowing for the grainy nature of the T Boland photos. Every piece of evidence has come together to show that Ted Boland is Thomas McCauley.

The story appears to be this; in 1913 as a 19 year old, Thomas McCauley is already an established high level sprinter, winning races off scratch. He is playing for Western Suburbs Rugby Union in 1914, his reputation as a sprinter already noted. He joins Wests Rugby League in 1915, plays in 1916 and the first two games in 1917. It’s likely at this stage his amateur status as a sprinter was challenged. He decided to play, using his middle name, through the rest of 1917/18 seasons, apparently with the full knowledge and approval of the League Club (simply acknowledging him as the ‘representative’ in the 1918 end of season sprint). For some reason he plays the following seasons 1919-21 under his correct name, although his election as Vice-President of the Amateur Athletic Club suggests his athletic career may have ended as the deception had become untenable.

The records can now be amended. Thomas Boland McCauley’s full playing record is continuous from 1915-21 as below: 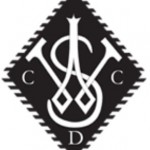 Postscript: In a great piece of detective work Tony Lewis sent me another reference that on the 14th April 1923, after Rugby League retirement, T B McCauley debuted for Western Suburbs Cricket Club at Pratten Park, predictably as a fast bowler, taking 4-32. Out for a duck however!  Sure enough, he appears as No. 230 in the Wests Cricket Club system. 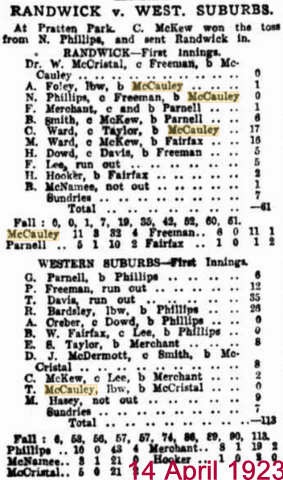 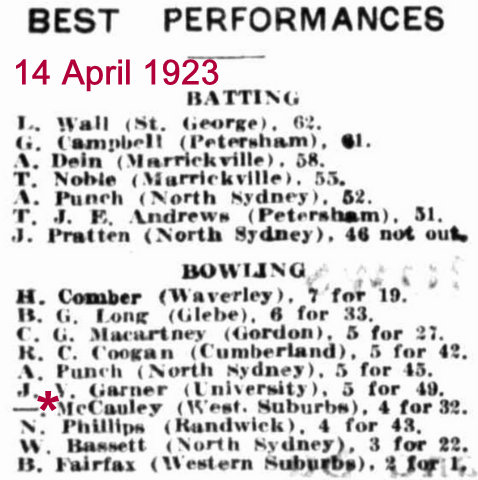 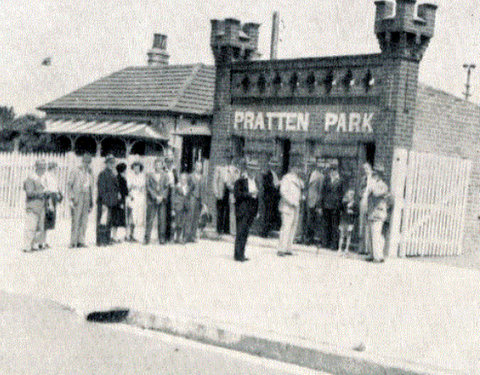 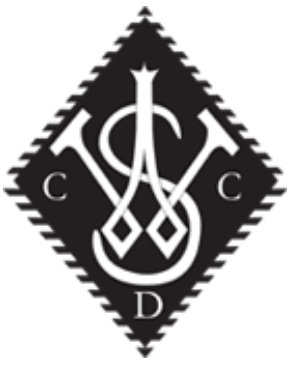 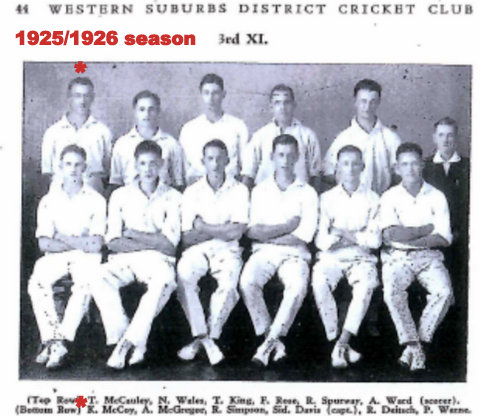 Tom at the age of 30 still playing cricket.

Also, after retirement he coached Concord United ‘A’ Grade for several seasons into the 1930’s. What a man!

He was a great overall sportsman, forced to hide behind a false name because of the amateur/professional dichotomy, and now finally able to be given full recognition.

One thing to check…..in 2009 WSDRLFC held a Hall of Fame and Centenary Medals Gala Presentation Dinner that was held at Wests Ashfield.

A special Medal and number were given to every player who played one First Grade game for Wests.

Maybe Tom McCauley is the only person to be eligible for two medals???

* Breaking News…..The Archives have confirmed that there are 2 Medals still to be given to Toms next of kin at the Wests Archives office.

If you can help find Toms family that would be brilliant!!!