He had been living at Yamba on the north coast in recent years & died on Monday from complications which developed after a knee replacement operation.

There will be a private cremation.

Mark grew up in the Richmond River area & enjoyed a wonderful career in rugby league. He represented Country, City & NSW & later played for Monaro against the touring French side.

Below is a story written about Mark Patch’s life which appeared in the Clarence Valley Examiner. 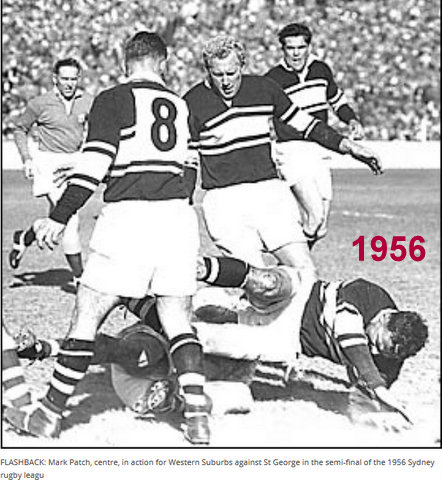 IN 1997 former NSW representative rugby league player Mark Patch and his wife Norma decided on a Sea Change and made Yamba their home.

The two love the setting of the attractive beachside resort, the people who live there, the excellent fishing and the lifestyle of Yamba.

Mark Patch was in many representative teams during his playing career, starting in the Richmond River area playing not only at club level but for Richmond River League and Group One.

He followed playing for Maitland and then with NSW Country and with ex-Grafton boy, Pat Pyers, in the NSW Probables against NSW Possibles in a State trial encounter.

A few future Magpies in these Country teams.

From there he went on to the Clive Churchill-captained NSW team.

It was only by a quirk of fate that on three occasions ? and on the casting vote each time of a certain NSW selector in the Australian panel with whom Patch was on unfriendly terms ? that he did not win final selection to wear the green and gold.

Mark Patch was noted early in his career as a devastating hard-running centre and after a few seasons was switched to the pack as a tough, relentless forward.

He was one of the no-backward-step brigade and as game as they come.

He was well suited playing in a hot pack of forwards for Sydney Western Suburbs and NSW against Queensland and the New Zealand Maoris.

Playing for Sydney Western Suburbs (The Magpies), he reversed his previous Country versus City status, gaining selection for City. 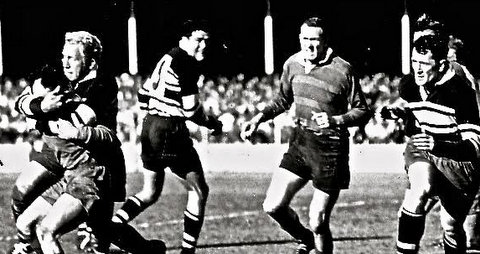 With Kel O’Shea, Jack Rayner and Billy Owens (without head gear) looking on.

After his years in Sydney Mark took up a country appointment with the Yass Rugby League club and represented the Monaro district against the touring French team at Canberra.

The French showed absolute brilliance at times but had to struggle to win the game 25-17 and Patch was named as the best for Monaro.

Mark was coaxed by Wests officials into making a comeback to the Magpies the following season and again showed his worth.

Later still Mark played and coached in the Armidale District.

Finally he returned to the North Coast and played for South Lismore and for Richmond River in Anthony Shield matches against the Tweed River League before finally retiring from football in the 1960s.

Albert Mark ? always known as Mark ? Patch was born in Lismore in December 1933, the son of Stan and Evelyn (nee Smith) Patch.

He was one of seven brothers with two sisters in a family of nine. Their father Stan had played football with the Larnook club (near Nimbin) in the days when virtually every country town or village had a rugby league team.

Stan was a share farmer and worked for the Lismore City Council.

He was big for his age and at South Lismore Public, cricket and soccer were his main sports.

At high school, because of his size, taller and heavier than other students, he was too big for the rugby league weight divisions in his age group and was asked to play in the open side.

He felt this was not quite fair because of the age difference and played soccer and hockey instead.

It was not until one day at high school as he walked past the football ground on sports afternoon he was asked if he would fill in as centre in an inter-class rugby league match when one of the teams was a player short. Somewhat reluctantly he accepted and found he deeply enjoyed the game and his sporting future was set.

“Dad was good cricketer and we were all proud of him and when he played at weekends ? the sons in our family had to do more of the milking on the property on which Dad was share farming,” Mark said.

While he was still a schoolboy, having qualified for the still water bronze medallion at school, Mark one day put his knowledge to good use, rescuing a man in trouble in the middle of the Richmond River.

He later became a member of the Ballina Surf Life Saving Club and although a good swimmer, became one of the club’s competition boat crew.

Mark was still growing when aged 15 he left school and signed with East Lismore, playing a season in third grade and then on to three seasons with North Lismore as a first-grade centre.

He was 18 when he first won selection for the Richmond River League playing in the Anthony Shield competition against Tweed River.

In 1954 he went a step further, selected for North Coast (a combination of Groups One, Two, Three and 18) playing in what was the annual Country Week Carnival.

North Coast played six matches in two weeks starting with a 22-8 demolition of Parramatta, where Patch was named one of the best players on the field.

A former Australian rugby league captain, Herb Narvo, was talent spotting for Newtown at the inter-group trials and approached Mark with an offer of 250 Pounds to join Newtown. A Parramatta scout also made an offer, 200 Pounds for Mark to join that club.

Even though it was a lot of money for that time, neither offer was accepted.

From there Mark played for Country Probables against Possibles and then was chosen to play for NSW Country Seconds against City Seconds with the Country boys beating the metropolitan brigade by one point, 16-15.

“I was named in the NSW side that year but was unable to accept as I had my kneecap broken and I missed the rest of the season with my leg in plaster for 18 weeks,” Mark said.

“In 1955 with the injury healed I took up an offer from the Maitland club to play in the Newcastle competition and once more won selection for NSW Country.

“I trained my guts out that year and again in the 1956 pre-season to gain a Sydney team contract and was picked up by the powerful Sydney Western Suburbs Club. Weighing in at 15 stone (96kg) that year and and on through 1957, 58, and 59 I was with Wests, playing alongside such greats as Keith Holman, Harry Wells, Peter Diamond, Darcy Henry, Kel O’Shea, Ian Moir, Billy Carson, Arthur Summons, Noel Kelly, Dick Poole, John Hayes, Darcy Russell, Don Parish, and Nev Charlton. 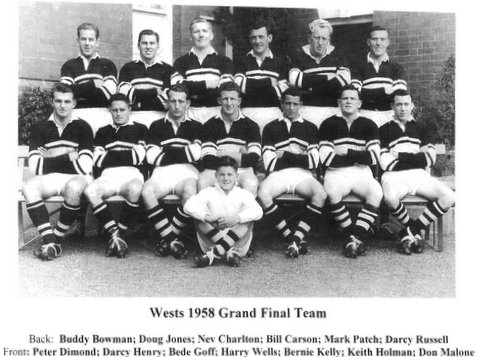 “Then in 1960 I was back in Country as paid player for Yass and represented the Monaro Group in that match against France.

“For 1961 I returned to Sydney with Western Suburbs and played in the first-grade grand final against St George at the Sydney Cricket Ground but we were beaten by the Dragons.

“I had played some reserve grade returning from injuries that year and found I qualified for the grand final in that grade and we won that premiership 9-4, meaning I had played in two grand finals in a week, losing one and winning the other.”

Western Suburbs in those years of the 1950s and early 1960s were labelled The Star Studded Millionaires because of the money officials had spent on buying and retaining players.

Later the term Millionaires or similar title was switched to the Manly Warringah Club and Western Suburbs, spending much less, became known as the Fibro Brigade.

In 1962 it was back to the Richmond, playing as captain-coach with South Lismore.

The club had finished wooden spooners in 1961, but under Mark’s guidance South Lismore made it through to the grand finals, beaten for the major premiership by Casino in a match Mark finished with a broken collarbone and stunning black eye.

Mark in turn coached in the country for Forbes and Baradine and spent a season or two as coach with Armidale in Group Four.

Mark had a son, Ross and daughter, Anne-Marie, from an early marriage and in 1975 he married for the second time with Norma Cross his bride, an ideal partnership which has endured and prospered.

It was second marriage also for Norma, who had a family of five, three boys and two girls, all great friends and regular visitors and e-mailers to Mark and Norma at Yamba.