The Rugby League Museum. One of a Kind.

I heard that a new Rugby League Museum had opened up somewhere near the old Sports Ground. 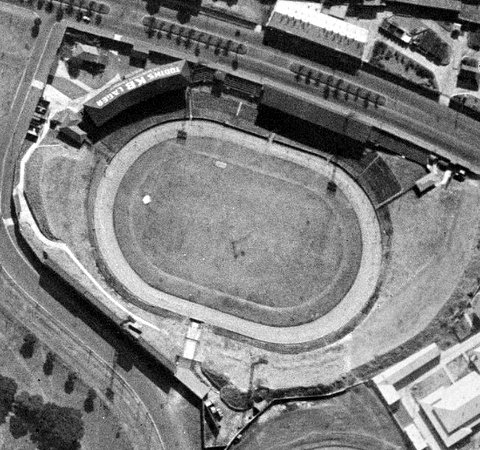 Sydney Sports Ground with Speedway Track around the outside.

So after checking with my secret info people (Google).

I was able to track down where it is. 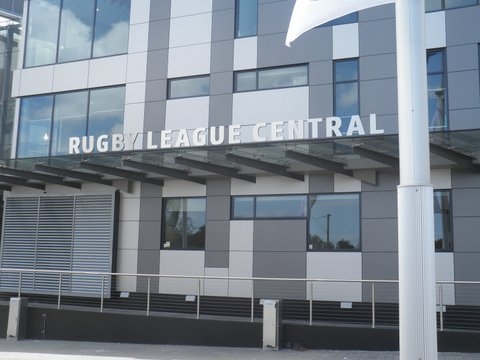 Its here. At NRL Headquaters aka RUGBY LEAGUE CENTRAL

Which is near the entrance to ALLIANZ Stadium.

(I was right were the old Sydney Sports Ground was in Drivers Ave). 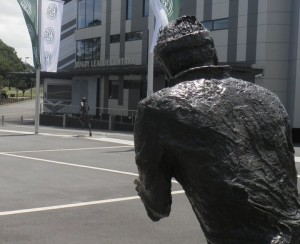 Thats the entrance down there near Reg Gasiner.

(I am looking over Trevor Allens shoulder.) 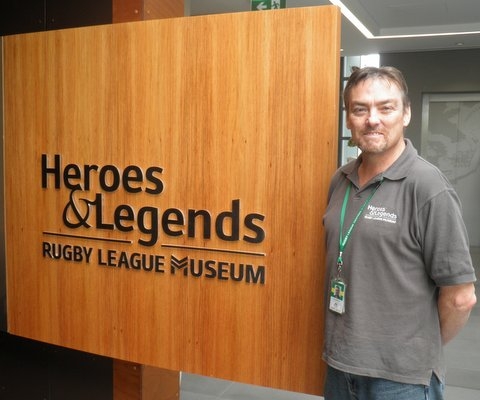 At the entrance to the museum.

Terry has written two Rugby League Books on the history of Newtown.

Both books are a must have for both Newtown fans and Rugby league fans.

I had spoken to Terry about having a tour of this fantastic museum and doing a story for this web site he was only too happy to show us around it and show us how the touch screen displays work as well as the many exhibits. 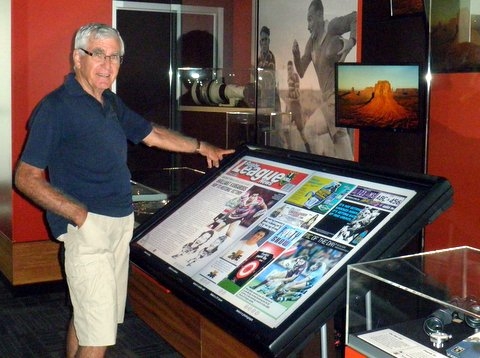 Thats Bob playing with one of the many touch screen displays.

Bob is one of the many old age Pensioners who enjoy this Museum. 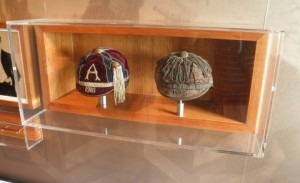 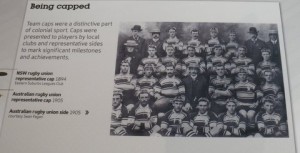 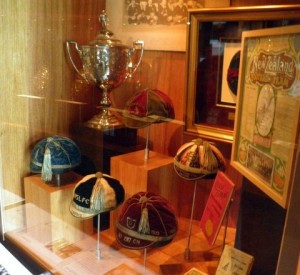 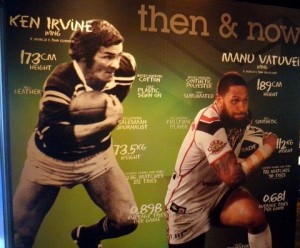 Just a few of many displays.

This one compares the late Ken Irvine to a modern day winger Manu Vatuvei. 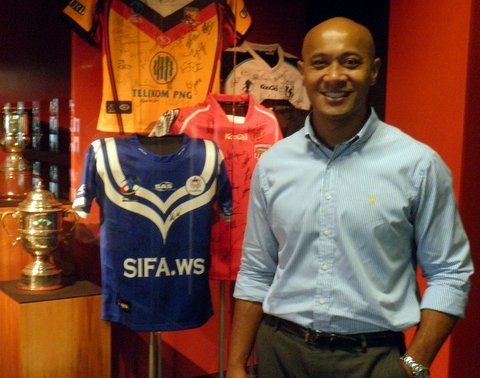 During our tour we were introducted to Frank Puletua.

The collection is being managed by former Penrith Panthers prop and Museum Manager, Frank Puletua, who played professional Rugby League for 12 years and has University Degrees in Graphic Design and Fine Arts.

Just one of the many cabinets full of Rugby League Memorabilia. 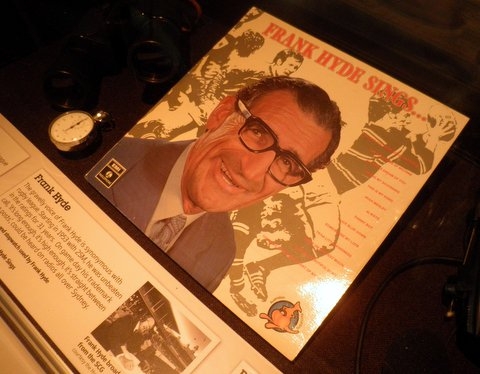 You can hear Frank Hyde saying those famous words “Its long enough,its high enough etc  by just pressing a button.

The Boy from Young.

Every major trophy, including the Maher Cup,

The Royal Agricultural Shield and the Winfield Cup, feature in the exhibition, which also includes a pictorial historical journey and several high-tech interactive displays with statistics and video of the game’s 100 Greatest Players and scope to compare past and present players. 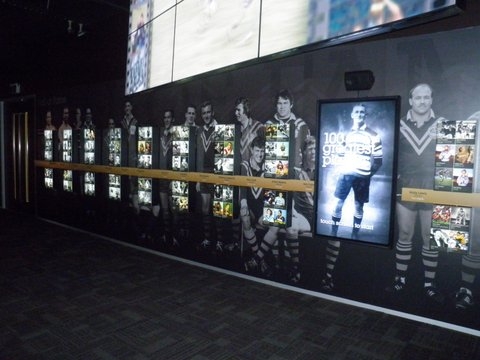 This is my favorite.

Statistics and video of the game’s 100 Greatest Players.

Look who I found. 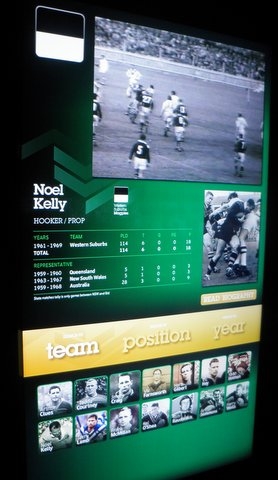 And Ned of course.

I think you could spend 2 hours just playing with this display. 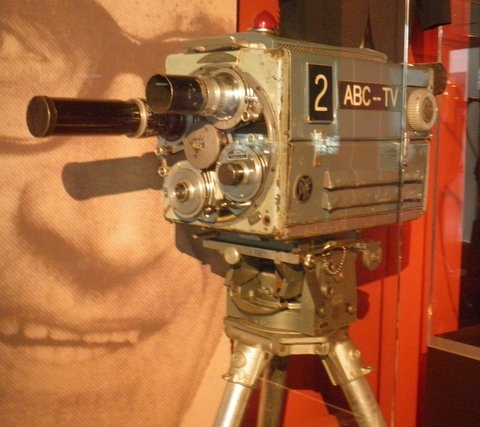 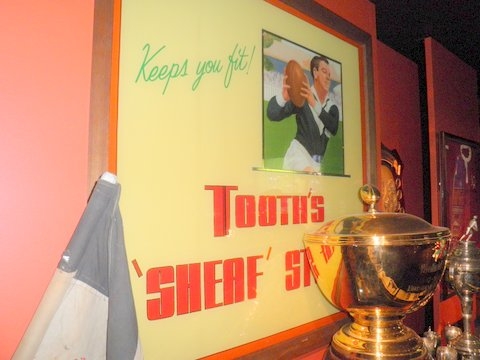 Just 2 more displays of hundreds that can be seen and appreciated by all generations.

The Black and White flag on the left of shot was from Pratten Park.

The Muesum is open between 10am and 3pm Monday to Friday.

Also during the season on Match Days.

Groups are most welcome.

and ask for Terry Williams.

I would allow at least 3 hours to enjoy this wonderful Rugby League Muesum. 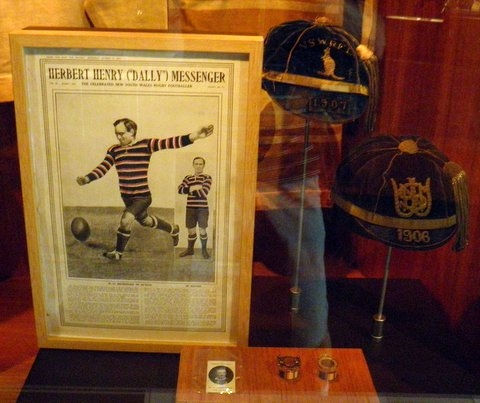 The greatest Rugby League player of all time? 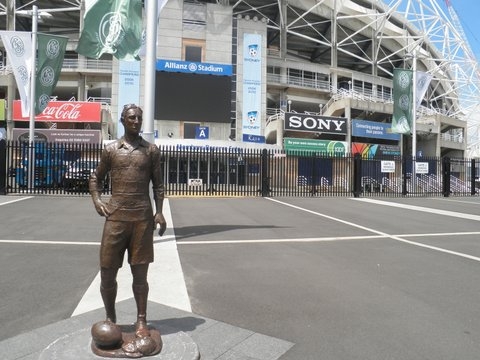 Dally with the ALLIANZ stadium behind him.

Thanks again Terry for your time and knowledge about this special game. 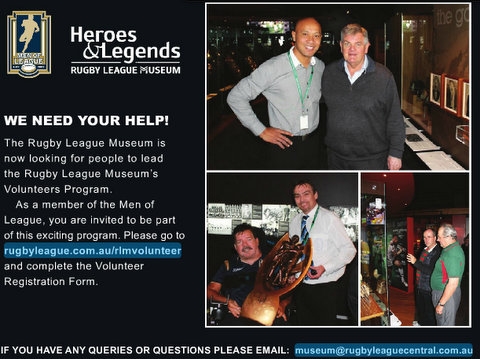 I went back to the Rugby League Museum yesterday (19/1/2015) with Kerry Kime  a very keen Souths supporter. Note the shirt.

Their knowledge of Rugby League is unique. 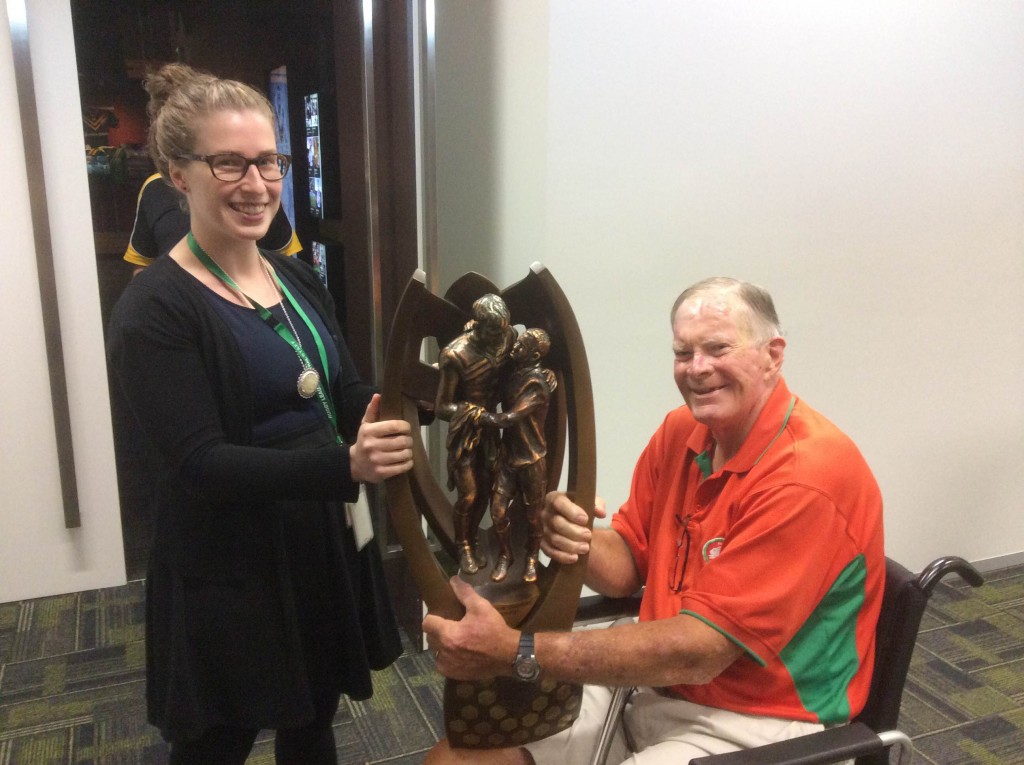 Miriyan Roser Registrar of the Museum and Kerry Kime.

Yes that is the real Trophy. Thanks Miriyan. 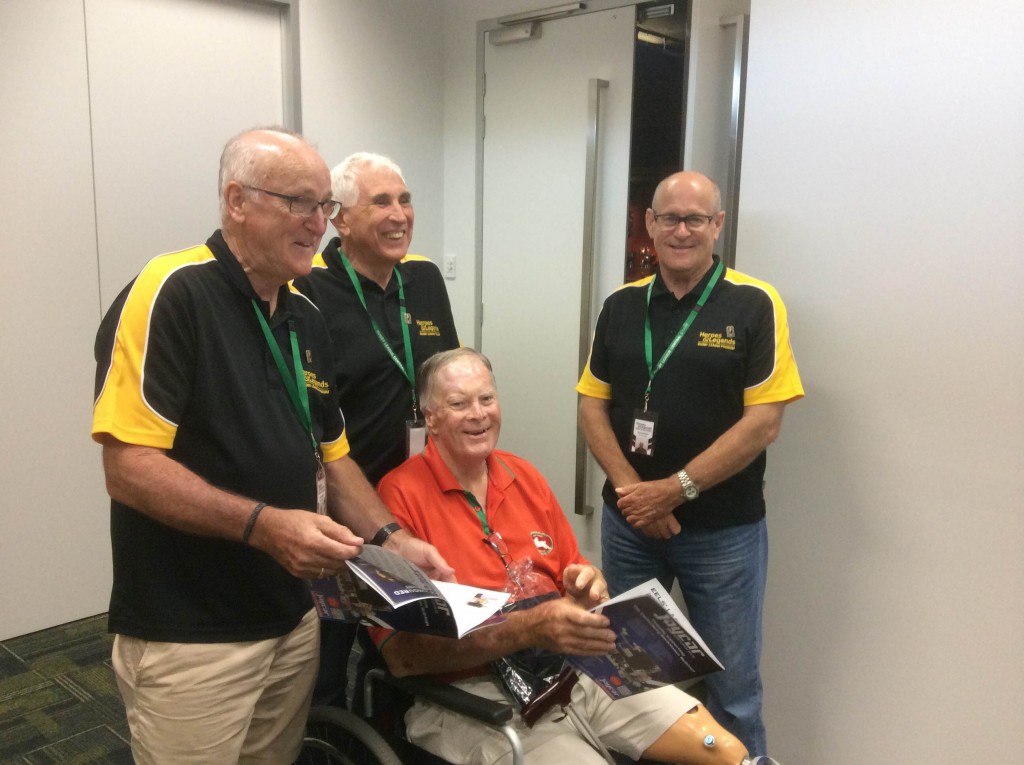 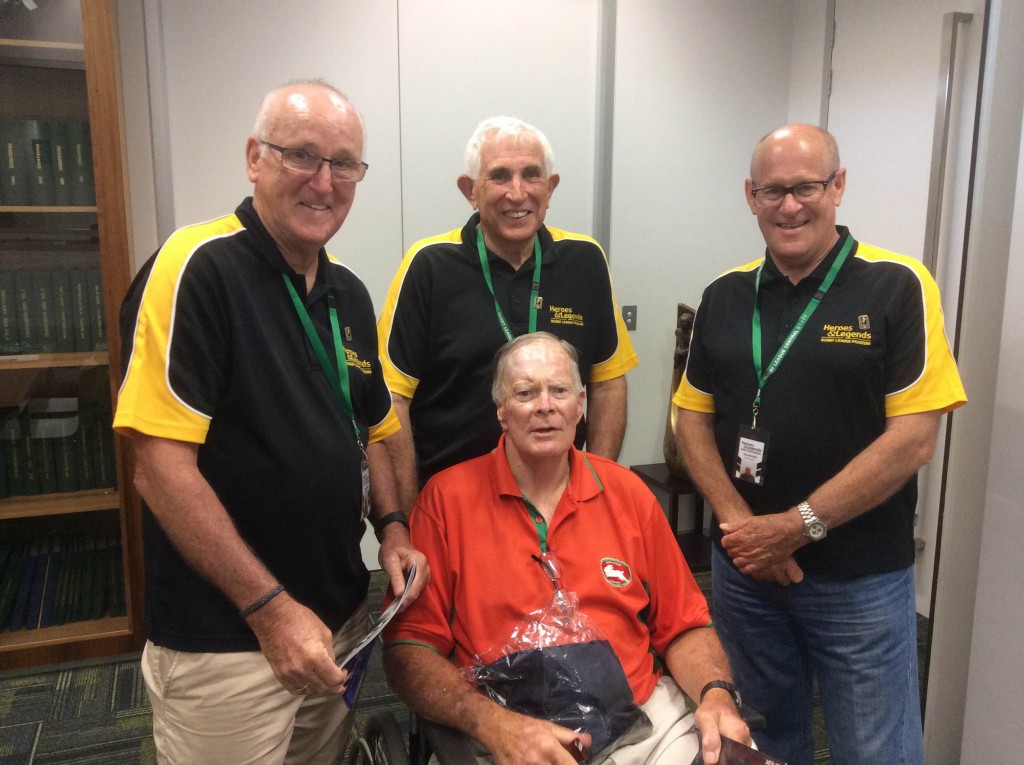 Kerry and I would like to thank the boys for their kindness.

If you can organise your visit to the Rugby League Museum for a Monday you too can meet Ken, Fred and Ian.

Just click on link below to complete the Volunteer Registration Form